The 2016 presidential campaign will surely go down in history as being one of the most divisive and tumultuous the country has ever seen. The losing candidate, former Secretary of State Hillary Clinton, released a new book September 12 entitled What Happened. It’s her seventh book with publishers Simon & Schuster and her third memoir, following Living History (2003) and Hard Choices (2014). Billed as her most personal memoir yet, it offers a detailed and unrestrained look at what it was like for Clinton to become the first woman ever to have been nominated for president by one of the two major U.S. political parties. 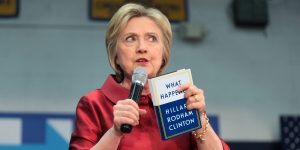 The memoir looks at the build-up to the election, election day itself and its aftermath, proposing multiple theories as to why Clinton lost the campaign many thought she would so easily win. Clinton looks at mistakes she herself made during her campaign and writes about how she has learned to cope with them since. While she blames many for her election failure, including the media, Vladimir Putin, white resentment, Green Party candidate Jill Stein, sexism, James Comey and Bernie Sanders and his followers, she also openly admits to blaming herself. She surmises that there are many lessons that can be learned from the campaign and that Americans need to understand the dangerous forces that influenced the election’s result in order to protect the country’s democracy and values.

Clinton will be embarking on an international tour to promote the book. It will start on September 18 and will last a few months, ending sometime in December. She is scheduled to visit the following states on her tour: California, Michigan, Illinois, Wisconsin, Florida, Georgia, Massachusetts, Pennsylvania, Washington and Oregon, along with, of course, Washington, D.C. She will also be visiting Canada, with stops pencilled in for Montreal, Vancouver and Toronto.