POTUS Trump has warned Moscow not to intermediate against any U.S. strike on Syria in the aftermath of a fatal chemical attack planned by the Assad regime.

Trump tweeted in the morning, he was referring to Syrian President Bashar Assad being cruel “Gas Killing Animal” and warned Russia for being “partners” with the Middle East. 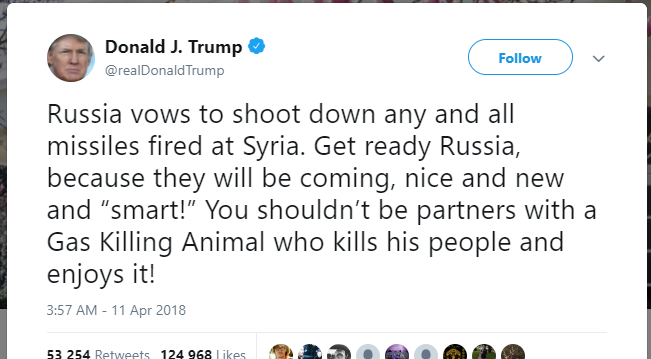 “Russia vows to shoot down any and all missiles fired at Syria,” Trump wrote. “Get ready Russia, because they will be coming, nice and new and ‘smart!’ You shouldn’t be partners with a Gas Killing Animal who kills his people and enjoys it!”

President’s tweet follows the announcement by Russia’s ambassador to Lebanon, who openly told a Hezbollah television station last Tuesday that Russia is going to shoot down American missiles fired at Syrian government targets.

“If there is a strike by the Americans, then…the missiles will be downed and even the sources from which the missiles were fired,” Ambassador Alexander Zasypkin told Hezbollah’s al-Manar television station.

Trump has postponed the South American Summit visit due to the situation in Syria, the White House said Tuesday.

On Monday he called the Saturday chemical attack in Syria “atrocious” and promised the U.S. will make “major decisions” about its reaction soon. Besides, the US will not rule out a military action.

“Nothing is off the table,” Trump said.

Suspected poisonous gas attack that took place in a rebel-held town Douma in the mid of a resumed offensive by Syrian authorities post the collapse of a truce. However, the Syrian activists, rescuers and medics said the attack in Douma killed at least 40 people, with families died suffocating in their houses and shelters.

In a series of multiple tweets, Trump lamented the state of the U.S. relationship with Russia and considered Special Counsel Robert Mueller’s investigation being hollow and “corrupt.”

“Our relationship with Russia is worse now than it has ever been, and that includes the Cold War,” Trump said. “There is no reason for this. Russia needs us to help with their economy, something that would be very easy to do, and we need all nations to work together. Stop the arms race?” 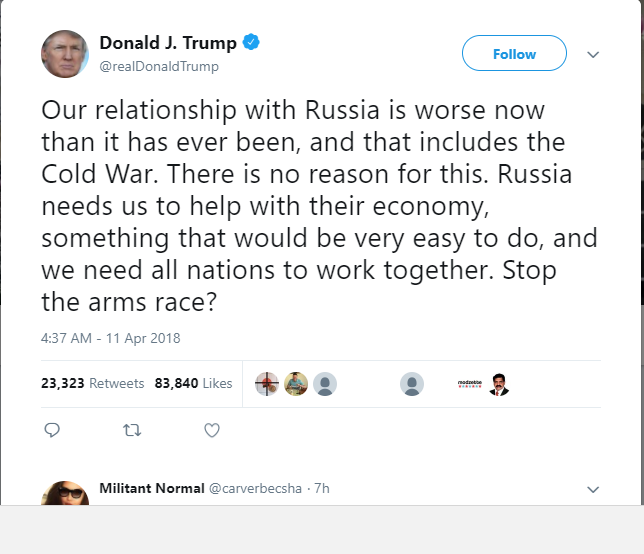 In the following tweet, he argued the US administration is “doing things that nobody thought possible, despite the never ending and corrupt Russia Investigation, which takes tremendous time and focus.” 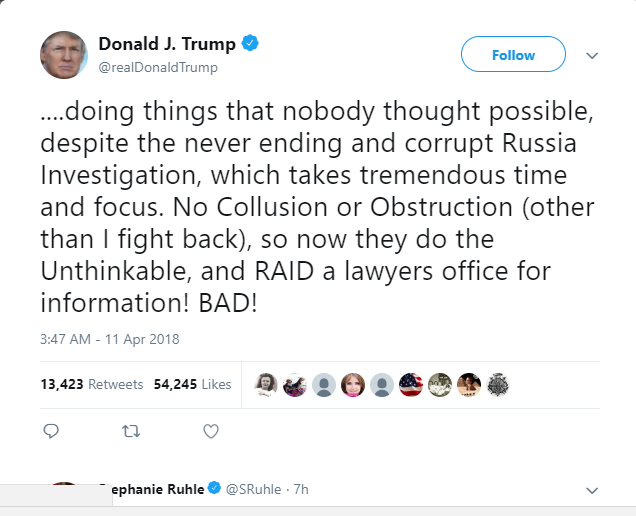 “No Collusion or Obstruction (other than I fight back), so now they do the Unthinkable, and RAID a lawyers office for information! BAD!” Trump tweeted.