How do you effectively deal with violent groups? If a group is going to employ violence as a means of achieving their goals, should the opposition also employ violence in an attempt to stop them? Mike Isaacson, a founder of the anti-fascist (or antifa) Smash Racism D.C. organisation, was speaking shortly before conservative pundit and writer Ben Shapiro was due to make a public speech at the University of California, Berkeley. 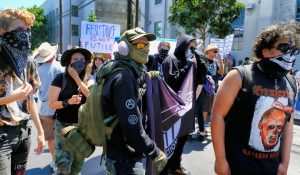 He expressed the idea that because Naziism is rooted in murder and violence, that the only effective way of dealing with them is with physical violence. In other words, you have to stoop to their level. He also affirmed the belief that the First Amendment shouldn’t protect Nazis and white supremacist groups, such as the one that was involved in the Charlottesville, VA, incident, because those people are seeking violent oppression and not free expression – the First Amendment shouldn’t have to protect those who wish to instigate violence or, to take things further, promote state-sponsored genocide, so thinks Isaacson. He believes white supremacists shouldn’t feel safe when organising public demonstrations, as their intentions are not right.

There was violence from both sides during the Charlottesville incident. Anti-fascist groups defended their right to employ violence against the white supremacists, stating that the Charlottesville police should have intervened a lot sooner before things escalated. One person died during the Charlottesville incident – if such incidents occur in the future and both sides are violent, could more deaths be caused? You could argue that one side should refrain from violence to reduce the risk of people getting hurt or even dying, but, as Isaacson would argue, sometimes you have to fight violence with violence.