Yet another awards show has turned into a let’s-mock-Trump event. It’s not uncommon for award shows these days to get political, with speakers and award recipients using their time in front of the mic to speak out about various causes and issues. Indeed, the show got underway with host Stephen Colbert devoting most of his opening speech not to acting (which is what the Emmys should be about), but about the president. 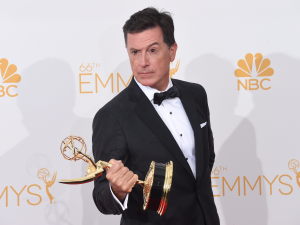 One of Colbert’s many jokes about Trump was as follows: ‘The industry is booming. There were 450 original scripted shows this year. Of course, there’s no way anyone could watch that much TV, other than the president, who seems to have a lot of time for that sort of thing’. After delivering this joke, he then looked straight into the camera and said the following: ‘Hello sir, thank you for joining us. Looking forward to the tweets’. Colbert said that when it came to making political jokes, he wasn’t going to pull any punches.

He went on to make further attacks on the president, including one where he segued into a clip of the presidential debate between Trump and Hillary Clinton when Clinton criticised Trump for going on about how the Emmys were rigged; Trump then interrupted to say he should have won one (for his work on The Apprentice and The Celebrity Apprentice). Colbert then remarked ‘But he didn’t [win], because unlike the presidency, Emmys go to the winner of the popular vote’. He later admitted that telling anti-Trump jokes wasn’t exactly hard since most of the celebrities in attendance weren’t Trump supporters.

Other celebrities who joined in on the anti-Trump jokes included Alec Baldwin, known for his impersonations of the president on Saturday Night Live, Grace and Frankie co-stars Jane Fonda and Lily Tomlin, Atlanta’s Donald Glover and Veep‘s Julia Louis-Dreyfus. The ceremony even featured a surprise appearance from the former Press Secretary Sean Spicer, which didn’t go down well with some given his association with Trump’s administration.

Trump Mocked By Various Celebrities At The Emmys